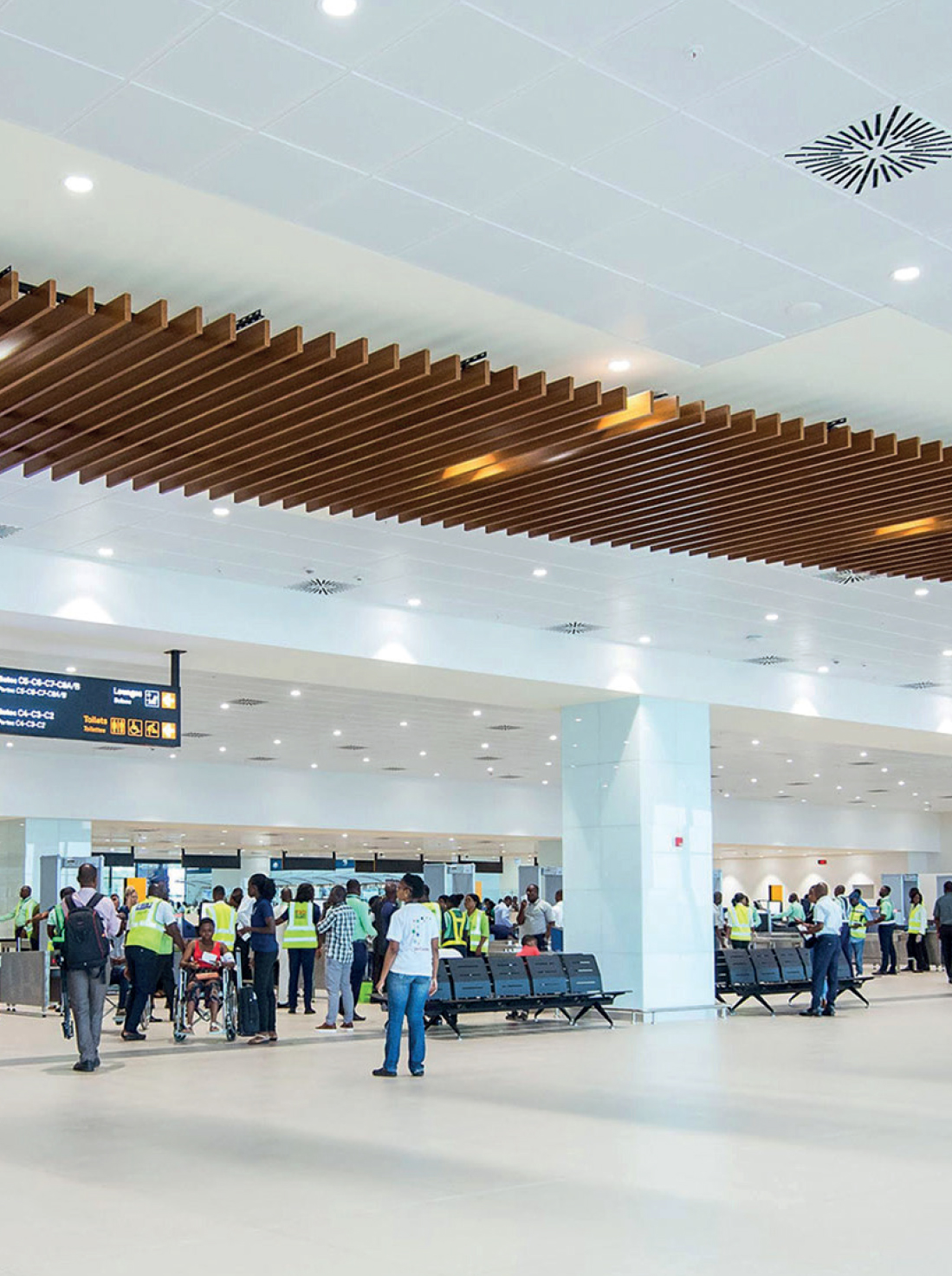 With Ghana expected to be one of the world’s fastest-growing economies this year, the country faces soaring demand for infrastructure in urban centres and a growing need to connect rural areas to the main cities. To address the issue, a major push to expand the infrastructure was presented in the government’s 2019 budget statement, with the aim of paving the way for accelerated socio-economic transformation. Ghana needs to invest over US$1.5 billion a year in the decade leading to 2023 to bridge the current infrastructure gap, according to a 2013 World Bank report.

Although Ghana’s infrastructure backbone covers the entire country, transport, power and information and communications technology (ICT) infrastructure networks are more concentrated in the South and South West of the country, where economic activity is stronger, according to PwC’s Africa Gearing Up report.

While public investment in infrastructure has increased, the country is actively engaged in involving the private sector to meet growing demand, through the Public-Private Partnership (PPP) initiative. The policies of the Ghanaian government seek to encourage investments in domestic infrastructure from both local and foreign private capital. The government is developing two industrial parks in collaboration with the private sector. The Dawa Industrial Park on the Accra–Aflao Highway currently has 2,000 acres fully developed out of 22,000 acres of available land; and the West Park Industrial Estate in the Western Region is constructing on-site infrastructure on 400 acres.

A number of PPPs are in the pipeline, as detailed below under ‘investment opportunities’.

Road transport represents 98% of freight and 95% of passenger traffic.

President Nana Akufo-Addo inaugurated the Tamale Interchange in April 2019. Three other road projects from the Sinohydro facility are at design stage, while an additional 1,300km of roads, three interchanges and 69 steel bridges are under consideration for implementation.

A large number of roadworks began all over the country in 2019, some of them designed to support the cocoa sector and other areas of agribusiness.

While roads have witnessed tremendous expansion over the last two decades, railroads need to spread out to serve all regions in Ghana. The government is actively seeking private sector participation to develop railway infrastructure.

Existing rail routes will expand to facilitate trade within the sub-region, which should boost Ghana’s competitiveness. Railways currently handle less than 2% of freight and passenger traffic and are concentrated in the South to transport export commodities. The rail network forms a triangle linking Accra, Kumasi and Takoradi and connects the major mining areas to the sea ports.

The government has initiated several projects in the railway sector. The governments of Ghana and Burkina Faso have launched feasibility studies on the proposed railway interconnectivity project between the Port of Tema and Ouagadougou.

Turning Ghana into a hub for West Africa

Ghana has one international airport in Accra, Kotoka International Airport, and four domestic airports located in Wa, Kumasi, Sunyani, Tamale and Takoradi, as well as an airstrip in Kpong. The construction of a new airport in Ho in the Volta Region is currently underway, with major works completed.

In 2018, Kotoka inaugurated its new terminal. The government has embarked on a programme to upgrade the Kumasi and Tamale airports to international status and Ghana is close to creating a new national airline. The number of air passengers rose to 2.3 million in 2018 from 1.1 million in 2008.

Ghana has two main seaports, in Tema and Takoradi. The port of Tema focuses on the import of heavy machinery and other containerised cargo. There is a terminal for handling crude and other liquid petroleum products which can accommodate tankers of up to 244 metres. A 450-metre bulk cargo handling jetty was built to provide additional berths to reduce vessels’ waiting time.

The Takoradi port specialises in the export of commodities such as cocoa, timber, manganese and bauxite. It has undergone major rehabilitation work in recent years and currently handles about 60% of Ghana’s exports. While Takoradi serves the offshore gas and oil fields, Tema has become a major outlet for Ghana’s landlocked neighbours Burkina Faso, Niger and Mali.

The ports are constantly struggling to keep up with increasing trade flows. As a result, Ghana has started building a new ‘inland port’ in Boankra near Kumasi to handle goods in transit to and from Ghana’s northern neighbours. This will be a multi-modal facility handling both road and rail traffic.

Approximately 51% of Ghanaians have access to improved water supplies. For the 8.4 million residents in the country’s urban areas this goes up to 61%. Ghana Water Company Limited (GWCL) covers 40% of total urban consumption. One of the challenges faced by GWCL is that 50% of its total output is unaccounted for.

The Ministry of Sanitation and Water Resources has awarded contracts for the construction of 750 boreholes and 50 limited mechanised schemes for selected rural communities within the country. Other water supply projects are underway.

The government has identified the establishment of sector-targeted Free Zones as a major driver for capital inflows and jobs for Ghanaians, starting this year with the preparatory work for attracting private investment into an Airport Free Zone (AFZ).

The AFZ will be a purely private sector investment with government only facilitating the process. Government will explore several options with potential investors.

GIPC also identifies a need for hiring and selling heavy equipment for infrastructure construction works. As part of its drive to attract PPP projects, the government has defined the following investment opportunities:

In January 2020, the government will be seeking a concessionaire for the Accra-Takoradi Motorway Project, to design, finance, construct, operate and transfer a 4-lane Dual Carriageway with Full Access Control along a largely greenfield alignment including link roads and overpasses along the 208km corridor between Mallam Junction/ Kasoa and Inchaban/Takoradi. The project includes the construction of interchanges in high-traffic intersections, bridges and drainage structures. The concession is for 30 years, including a 2-year construction period.

In December 2020, the government will publish a request for tender for the Sogakope-Lomé Transboundary Water Supply Project. Th e project aims to design, finance, build, operate and maintain (i) a system of pipelines to carry water from the Volta River in Ghana to Lomé, Togo, with additional deliveries to certain towns in Ghana, (ii) a water purification facility near the intake point in Sogakope, Ghana, and (iii) any required pumping stations. The concession will be for 21 years, including a 3-year construction period.

In December 2019, a request for tender is expected for the Development of a Metro Rail / Light Rail Transit System in Kumasi and its Environs. The project will involve the design, finance, build and operation of a rail-based mass transit system on priority corridor(s) in Kumasi and its environs.

Investors are due to be sought in December 2019 for the development of the Trans-ECOWAS Railway Line from Aflao to Elubo. The project will include the design, finance, build and operation of 560km of two single-track standard-gauge lines from Aflao (near the Togo border) through Tema, Accra, Cape Coast, Takoradi to Elubo (near the border with Côte d’Ivoire).

Bids will be sought for the Ghana-Burkina Railway Interconnectivity Project (Ghana-Burkina Faso line) in December 2019, to design, finance, build and operate a 1,040km standard-gauge railway line from the Tema Port in Ghana through Akosombo, Ho, Yendi, Tamale, Paga, Walewale, Bolgatanga and Navrongo to Ouagadougou, the capital of Burkina Faso.

TOP Guide is a special business publication distributed with African Business Magazine [www.icpublications.com]. Thanks to this partnership, the guide reaches the same destinations and same target readers of African Business; it is distributed in business-class on-board of the major airlines connecting Africa to the rest of the world, and in the best hotels across the continent. It is also circulated at some of the major events African Business Magazine is partnering with, such as the World Economic Forum, Mining Indaba (South Africa), Oil & Gas Summits and Expos, Africa Oil Week, Africa Ports & Harbours Show, IMF / WB Annual meetings…