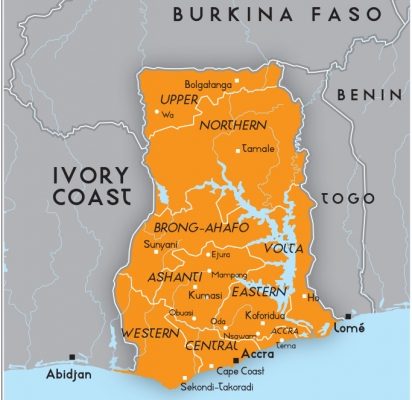 For more than a decade now Ghana has been classified as a middle income country and continues to be in the top ten of leading African nations with an average GPD growth of 6.48% per year.

Its population has increased this year to 31.2 million people and its poverty rate has been stable for a few years now. Also after Covid-19 the three largest employment sectors – agriculture, industries and service – carry the most promising economic prospects for the future of Ghana.

On the map of West Africa, Ghana is easy to locate on the coast of the Gulf of Guinea, about five degrees from the Equator. It is surrounded by francophone neighbours such as Ivory Coast, Burkina Faso and Togo. The Greenwich Meridian runs through the middle of the country. It has a land mass of more than 238,500 square km and the Volta river system is its largest water body that stretches from the northern city Tamale all the way to the coast.

With a population of at least 2.5 million people, Accra is the biggest city in the country. Over the years the capital has made visible progress to become one of the major modern cites in Africa. With its highways, sky scrapers, urban areas and the expansion of the international airport, it functions as the commercial and political centre of Ghana. On a much larger scale, the Greater Accra Metropolitan Area (GAMA) accommodates more than 4 million people, living and working in and around the capital.

Ghana has a tropical climate with a long and a short rainy season that begins in March and ends in November. The northern part of the country experiences less rain and is more hot and dry than the southern part. Temperatures are quite consistent throughout the year and vary around 28 degrees. Notable is the harmattan that starts during the dry season (November-March) when the north-eastern wind blows dust from the Sahara desert.

Every year the population of Ghana grows with more than 2 percent. Life expectancy has risen to 65 years and its fertility rate is similar to previous years, about 4 children per woman. Like many other African countries, the youth forms the biggest demographic and is therefore the focus of many employment programs. A majority of the people (56%) lives in the urban areas. The largest ethnic groups are the Akan, Mole-Dagbon, Ewe and Ga-Dangme.

Ghanaians speak beside the official language of English, which is taught in school, also many other African languages such as Ga, Ewe, Akan and Hausa. Twi is the main Akan tongue, widely spoken in the central and southern regions of the country. There is also a great diversity of religions where Christianity (71%) takes the lion share of the population. About 17% of the people are Muslims, concentrated in the northern regions and about 5% practices an indigenous believe system.

Ghana became a Republic since its independence in 1957, leading the way for other African nations in the post-colonial era. The Constitution of 1992 guarantees the freedom of press, political parties and democratic elections. For three decades the government has been occupied by either the centre-right party, NPP, or the centre-left party, NDC. Ghana is also still a member of the Commonwealth and is currently the chairman of ECOWAS, a political and economic collective of West African countries.