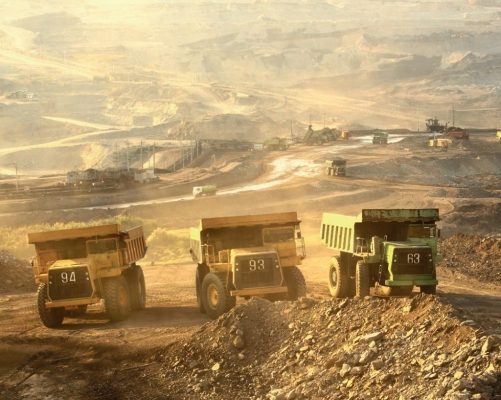 Ghana’s mining industry revolves mainly around gold, manganese, bauxite and diamonds. Other minerals include gravels, granite and limestone among others. The sector is a major contributor to government revenues through taxes and royalties. In 2018, gold accounted for 14% of GDP and represented 49% of Ghana’s exports.

Ghana’s gold reserves lie in the Ashanti region, including large deposits in Obuasi, and in the Western and Central regions. Ghana’s gold exports rose from US$4.92 billion in 2016 to $8.35 billion in 2018, according to the Observatory of Economic Complexity. The government attributed this increase to rising prices and increased production. Perspectives for Ghana’s gold industry are favourable as investors are confident that gold prices will keep going up in the next 2 to 3 years.

Manganese exports increased by 61.4% in 2017 to $161.79 million, aft er expansion works at the main port. Logistical issues had slowed down the export of manganese in previous years. Ghana Manganese Company Limited is one of the country’s primary providers of manganese mining services.

Bauxite, which is used to produce aluminium ingots, is also significant on Ghana’s exports list. Bauxite comprised approximately 0.4% of Ghana’s exports by value in 2017, compared to 0.3% in 2016. The country recently set up the Ghana Integrated Aluminium Development Corporation (GIADEC) to create an aluminium industry that will transform the extracted bauxite locally, thus adding value to the raw mineral.

Diamond exports totalled approximately 86,780 carats in 2017, an increase from 53,070 carats in 2016. Ghana’s diamonds are mainly used for manufacturing.

There is still space for small companies willing to invest in Greenfield exploration and production. However, the permit purchase and renewal fees are more expensive and take more time in Ghana than in other African countries such as Burkina Faso.

Illegal mining, known as galamsey, continues to plague the Ghanaian mining industry despite a government clampdown on illegal miners, foreigners and Ghanaians, in 2013. President Nana Akufo-Addo, who took office in 2017, also declared war on galamsey and sent a special task force to the Ashanti, Eastern and Western regions in August 2017. Illegal mining threatens the environment and human health through destructive mining methods that use toxic mercury and uncontrolled practices that contaminate streams and rivers. The government estimated that about 1 million people engaged in small-scale mining in 2015 but the figure was reduced to 200,000 in 2017, 85% of whom were illegal.

The following engineering services could be developed:

Specific investment incentives for the mining sector include:

The holder of a mining lease is also granted the following benefits: