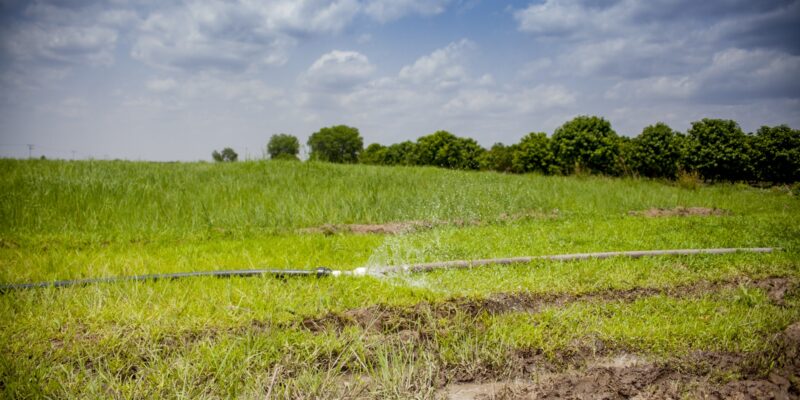 Agriculture employs about 50 per cent of Ghana’s population and contributes about 20 per cent to its Gross Domestic Product. It is predominantly driven by smallholders and reliant on rainfall.

The major strengths of the sector stem from a diversity of commodities, well endowed drainage basin, a well-established agricultural research system and a relative proximity to the European market. The Ghana Irrigation Development Authority estimates that out of 13.5 million hectares, about half is under cultivation, with 223,008.85 hectares supported by irrigation.

In the forest zone, tree crops are significant with cocoa, oil palm, coffee and rubber being of importance. The food crops in this area are mainly inter cropped mixtures of maize, plantain, cocoyam and cassava. The middle belt is characterised by mixed or sole cropping of maize, legumes, cocoyam or yam, with tobacco and cotton being the predominant cash crops. Cotton and tobacco are also important in the northern sector, where the food crops are mainly sorghum, maize, millet, cowpeas, groundnuts and yam. Rice is important in all the zones.

Agriculture contributes to Ghana’s export earnings, serves as a major source of inputs for the manufacturing sector and it is a vehicle for creating employment. The sector employs over 50 per cent of the population in Ghana. The sector has a greater impact on poverty reduction than other sectors in Ghana’s economy and it is critical for rural development and associated cultural values, social stabilisation, environmental sustainability, and serves as a buffer during economic shocks.
Planting for Food and Jobs, launched in April 2017, is an example of efforts by government to boost the sector. This flagship program supports farmers with seed, fertiliser and know-how in primary commodities and cash crops, and encourages natural soil maintenance and technologically advanced growth methods. PFJ is now promoting investment partnerships to address innovation and value-added production with focus on domestic, Africa regional and export-led growth.

Another initiative is Rearing for Food and Jobs, a five-year programme aimed at building a competitive and efficient livestock industry capable of increasing meat production, reducing meat imports, generating employment and income for all actors along the livestock value chain and the national economy. The programme covers the sixteen regions of the country targeting value chain actors along five animal species – poultry, sheep, goats, pigs and cattle.

In 2020, domestic production of all main staple crops increased due to greater fertiliser use and improved seeds as part of PFJ interventions, as well as improved extension delivery and technology demonstrations associated with Modernising Agriculture in Ghana (MAG). The amount of fertiliser provided under the PFJ program grew by 28 per cent over the previous year. Similarly, the number of improved seeds provided to farmers grew by 60 per cent from 18,333.00 MT in 2019 to 29,500 MT in 2020.

The interventions by the government to address these problems include the promotion of improved harvesting technologies, construction of strategic warehouses, purchase, storage of farm produce by NAFCO and storage of seeds by the Grains and Legumes Development Board (GLDB).The Ministry of Special Development Initiatives (MSDI), in partnership with the Ministry of Food and Agriculture (MoFA), has constructed 63 of the 70 warehouses planned by the government, each with a capacity of 1000MT, to reduce post-harvest losses as a result of increased cereal production. The remaining 17 unfinished warehouses are in various stages of construction. The National Grains and Inputs Storage Facility has been expanded as the results of warehouses completed in recent year and the government has directed its efforts towards attracting private sector investment, improving access to finance for agribusiness and marketing. As part of these efforts, the government has taken measures to improve marketing through the Ghana Commodity Exchange (GCX), National Food Buffer Stock Company (NAFCO) operations and strengthening the capacity of agribusiness actors along the value chain to enhance their operations.